Registration for the second DJI Developer Challenge began on March 14th, go to the DJI Developer webpage and register now before May 10th for your chance to win.

This is a unique opportunity for programmers and innovators to create amazing apps for DJI flight platforms. Your creations could be applied in a variety of developing industries, and DJI is awarding $15,000 USD in cash to the top team or individual. 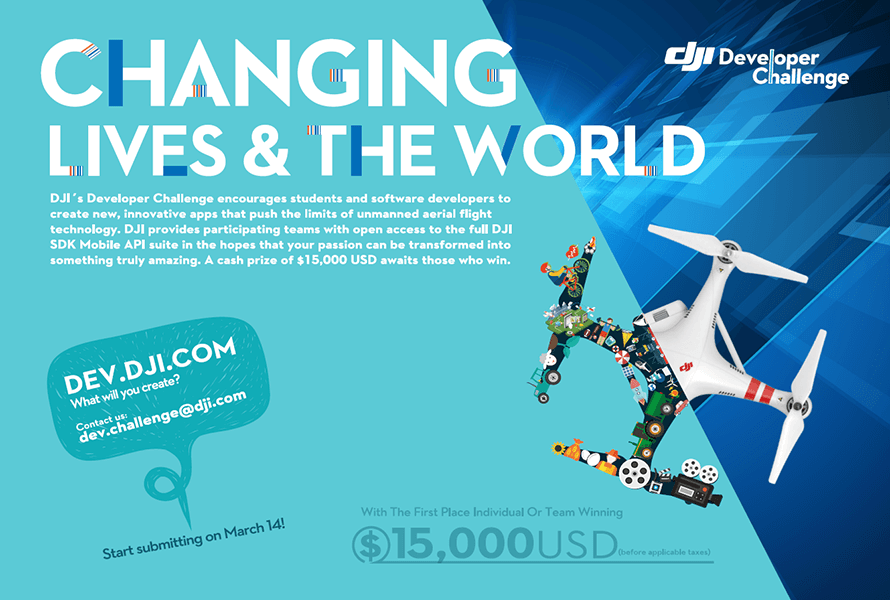 DJI released its Software Development Kit on November 11th, 2014 to be compatible with our DJI Phantom series. The SDK supports both iOS and Android systems and provides open access to the camera, Wi-Fi range extender, gimbal, flight status system, ground station and flight control data, which allows developers to send commands to their Phantoms and create apps for industrial and commercial use.

The first DJI Developer Challenge was launched in China last year, and over 100 entrants competed in the contest. Earning the first place prize, team BetterW designed and developed an application intended to alleviate traffic jams and road congestion due to automobile crashes, and they won the grand prize: a 100,000 RMB cash award and an internship offer from DJI.

The theme for the second DJI Developer Challenge is “Changing Lives & The World” and is now open to students and independent programmers anywhere. Participants will help show the world the unlimited potential of small drone technology.

Every team should register and submit a draft proposal before starting on their app. DJI will then decide which teams should continue and offer limited technical support to them during the contest. The judges of the contest will be experts from UAV industry, technicians, and experienced entrepreneurs, and they will select the most outstanding teams.

Every proposal explored in this contest has the potential to change people’s lives and the world. The revolution is just beginning, so grab this opportunity to make a difference now.