DJI Improves Geofencing To Enhance Protection Of Airports Across Asia-Pacific

DJI, the world’s leader in civilian drones and aerial imaging technology, is improving its geofencing technology with the launch of its Geospatial Environment Online (GEO) 2.0 system in two dozen countries and territories in the Asia-Pacific region. DJI first developed geofencing for its drones in 2013 and the refined GEO 2.0 system is the company's latest effort to help protect traditional aircraft and promote safe drone operations.

DJI’s GEO 2.0 system creates a detailed three-dimensional “bow tie” safety zone surrounding runway flight paths rather than just simple circles used in earlier geofencing versions. The new system better reflects the actual safety risk posed in those areas and is more flexible in lower-risk areas, for example by permitting authorized users to conduct inspection activities in locations parallel to runways but not near air traffic. DJI’s GEO 2.0 system has been implemented in the United States last year and more recently, in more than two dozen countries across Europe.

“DJI is pleased to introduce our new geofencing system to users who operate their drones in the Asia-Pacific region," said Adam Welsh, Head of Asia Pacific Public Policy at DJI. “DJI pioneered geofencing for drones, as well as automatic altitude limitations, obstacle avoidance systems and various other initiatives that promote safe drone operations. Safety remains the top priority for the company as the industry continues to explore new and innovative ways to use drones to enhance their workflow and productivity."

The expansion of geofencing coverage means DJI’s GEO 2.0 system will now cover airports across the Asia-Pacific region. GEO 2.0 applies the strictest geofencing restrictions to a 1.2-kilometer-wide rectangle around each airport runway and the three-dimensional flight paths at either end, where airplanes ascend and descend. This “bow tie” shape opens more areas on the sides of runways to beneficial drone uses, as well as low-altitude areas more than 3 kilometers from the end of a runway, while increasing protection in the locations where traditional aircraft actually fly.  More flexible geofencing restrictions apply to an oval area within 6 kilometers of each runway, in order to prompt drone users to make thoughtful flight decisions prior to their operation.

DJI first created No-Fly Zones for its drones in 2013 and introduced the more refined GEO system three years later in the United States and parts of Europe. These systems recognized that the overwhelming majority of drone pilots want to fly safely and responsibly, and want an easy-to-use guide to help them understand nearby safety risks so they can do so.

DJI geofencing uses GPS and other navigational satellite signals to automatically help prevent drones from flying near sensitive areas such as airports, prisons, and locations that may raise safety or security concerns. In certain locations, a DJI drone cannot take off within, or fly into, a geofenced area without special authorization. Drone pilots with verified DJI accounts can self-unlock some areas if they have necessary approvals from local authorities, but the most critical areas require extra steps from DJI to unlock them. DJI has streamlined the approval process so professional drone pilots with authorization to fly in sensitive locations can promptly receive unlocking codes by submitting a request to DJI online.

DJI’s new boundary areas around airport runways in the GEO 2.0 system are based on the International Civil Aviation Organization’s Annex 14 standard for airspace safety near runways. DJI also consulted with aviation organizations on ways to enhance geofencing features near airport facilities. DJI’s categorization of airports is based on airport types, numbers of passengers, operations and other factors, influencing the sensitivity of the airspace around a given location. DJI has used these aviation parameters to put a new system in place that better addresses safety concerns and airspace risk around airports. It does this by extending coverage of the approach, takeoff and on runways.

While DJI’s GEO system provides drone users with information that helps them make smart decisions about where and when to fly safely, each drone operator is responsible for ensuring that any specific flight is safely conducted in accordance with applicable regulations, which often differ from one jurisdiction to another.

▪️ The Return-To-Home feature can automatically guide the drone back to its takeoff point if it is low on battery or if it loses connection with the remote controller.

▪️  DJI introduced an in-app Knowledge Quiz to help drone operators to learn and demonstrate understanding of basic safety rules and best practices before taking their drones to the skies. The DJI Knowledge Quiz has been introduced in the United States, United Kingdom and Australia, with other countries and territories to follow.

Other useful resources can be found here: https://www.dji.com/hk-en/flysafe

This chart demonstrates how the DJI GEO 2.0 system applies detailed, risk-based airspace principles to the airspace around airports that can be considered to involve relative high, medium and low risk: 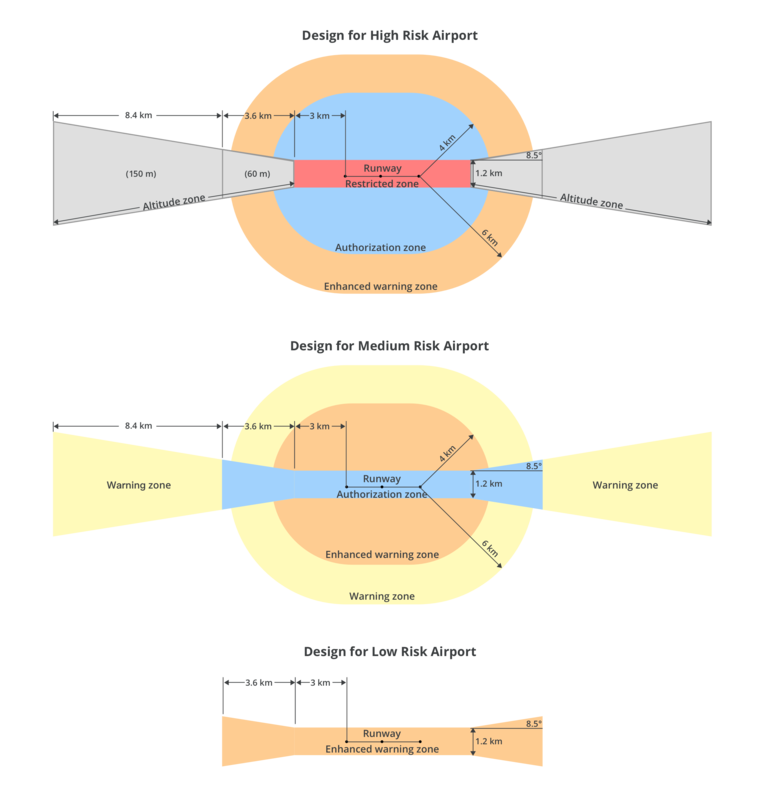