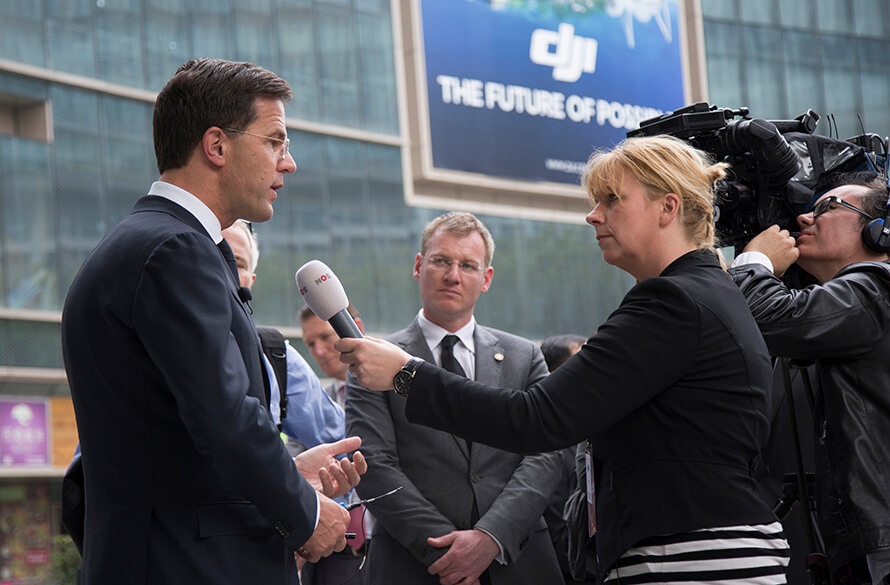 In March 2015, Prime Minister of the Netherlands Mark Rutte made a state visit to China, and he took time from his busy schedule to fly to Shenzhen and visit DJI headquarters.

On the afternoon of March 27, the Prime Minister’s motorcade arrived at DJI, and was received by DJI founder and CEO Frank Wang. They exchanged opinions around the topic of “What is innovation?”

Frank said the main reason for DJI becoming the world’s leading company in the small UAV industry is because it respects every dream and blazes new trails in technology. He also said, on one hand, DJI will continually produce the best products and help extend their use to more industries; on the other hand, DJI will continue fostering innovation at large, through supporting our R&D team and holding contests for students to help more young people realize their dreams and increase the attractiveness of becoming a creative engineer. 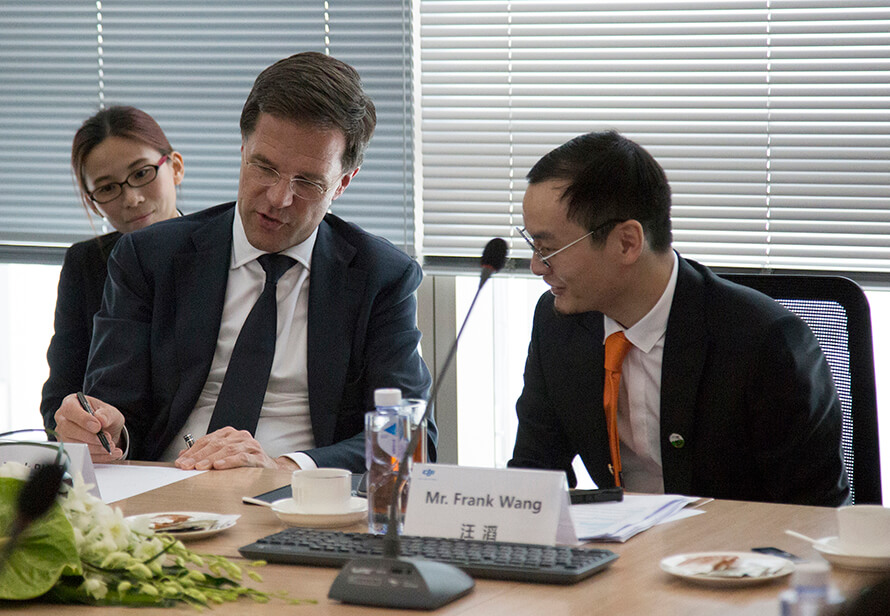 Mr. Rutte appreciated Frank’s startup experience, and he also expressed sincere congratulations for the amazing achievements of Frank and his team. He discussed the possibility of the Netherlands cooperating with DJI to hold more international events to spur innovation and also invited Frank to speak at universities in the Netherlands to inspire young talent.

Mr. Rutte said a lot of people have dreams, but few of them dedicate their lives to realizing their dreams. He said he believes more people around the world would be willing to join DJI in the spirit of innovation and entrepreneurship after hearing Frank’s startup story. 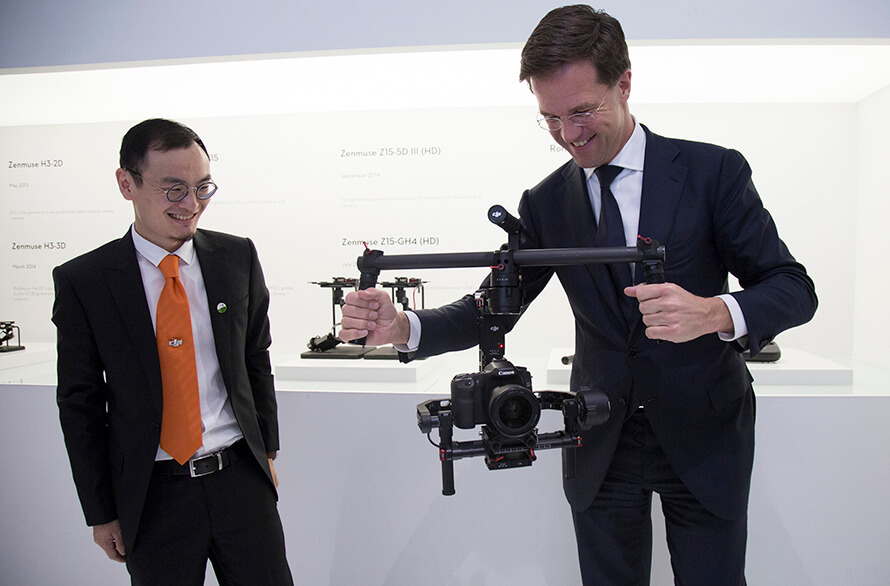 Mr. Rutte showed great interest in DJI’s product line during his visit. He even tried his hand at the DJI Ronin 3-axis camera stabilization gimbal and experienced the Inspire 1, the world’s first complete flight system equipped with a 4k camera.

It may be unusual for a head of state to visit a private company, but the tremendous achievements that DJI has made over the past few years are undeniable. The DJI Phantom 2 Vision+ was selected as one of the “Top 10 Gadgets” by Time magazine, while the Inspire 1 is viewed as one of the best drones in the eyes of major media and customers around the world. 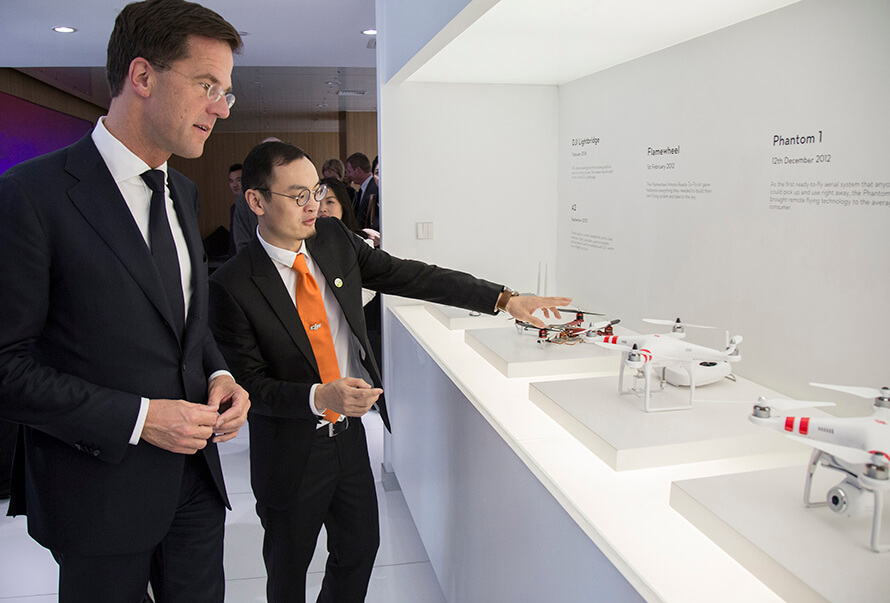 DJI has experienced several years of consecutive triple-digit growth, making it easily one of the world’s fastest growing companies in the hi-tech industry. Late last year, Fast Company released their list of the World's Top 10 Most Innovative Companies of 2015 In Consumer Electronics, and DJI was among the top 3, together with Google and Tesla. 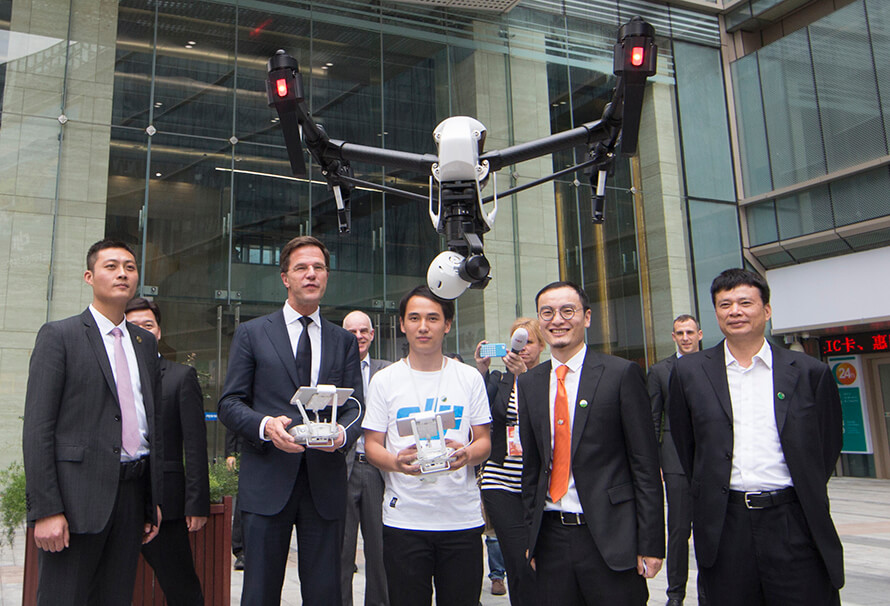 Learn more about the DJI Ronin.