Drones on the Beat: The Future of Journalism 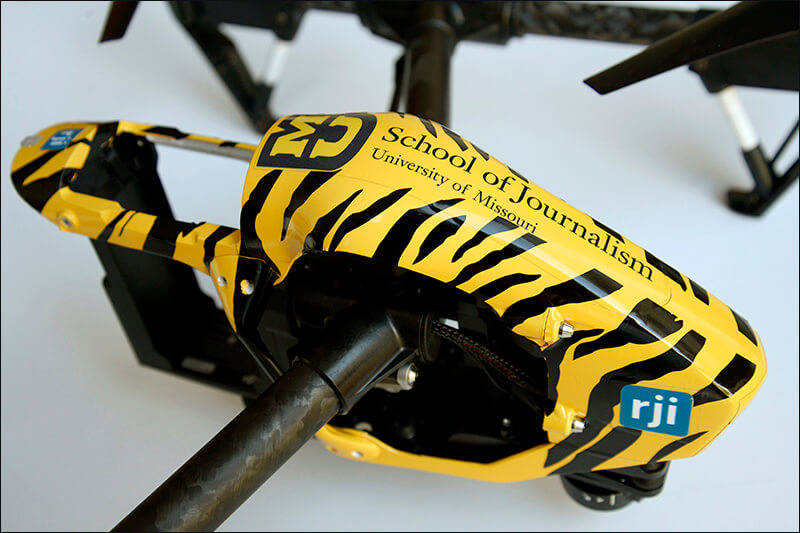 The DJI Inspire 1 in University of Missouri School of Journalism "skin" is used to train the next generation of "dronalists".

As the Federal Aviation Administration continues to mull over opening the skies to more widespread commercial drone use, journalists and news organizations across the United States are already learning how to fly Unmanned Aerial Vehicles for newsgathering. Aerial drone footage is becoming more and more popular in newsrooms and it’s not hard to see why.

Traditionally, journalists would have to fly expensive news choppers or use bulky camera equipment to report on stories in hard-to-reach places. But now, drones equipped with high-quality cameras enable reporters to cover news events unfolding in areas previously considered to be inaccessible. That’s why some of the largest news organizations in the United States, including the New York Times and the Washington Post, are using drones to take photos and videos of simulated news events at an FAA designated test site at Virginia Tech University.

“The AP is excited to join with these other leading media companies in exploring the safe and responsible use of drone technology for news gathering purposes that further our understanding of current events.”

—Santiago Lyon, Director of Photography at the Associated Press

Beyond the test sites, news networks such as CBS have even used drones to capture aerial footage of Chernobyl, which has been largely abandoned after a nuclear plant explosion in 1986. Besides enabling news organizations to film in locations where few journalists would be willing or able to go, drone journalism (or “dronalism”) also allows newsrooms to save considerable costs.

“Unmanned helicopters and fixed-wing planes can be bought at hobby shops and online for less than $1,000. By comparison, it costs news outlets about $1,500 per hour to rent a helicopter and owning one can cost ‘hundreds of thousands’ of dollars each year for pilots, fuel, maintenance and other expenses.”

—Matt Waite, Journalism Professor at the University of Nebraska at Lincoln

Despite the popularity and potential benefits of using drone technology in journalism, the FAA is still moving slowly in finalizing its proposed rules for commercial operations, currently only allowing news companies to use breaking-news type drone footage shot by third party amateurs. Nonetheless, drone journalists and major media outlets in the U.S. remain adamant, and confident, that the FAA will come around and give reporters more freedom to express their First Amendment newsgathering rights. Banking on the FAA to loosen the rules, pioneering journalism schools like the University of Missouri’s Drone Journalism Program are even training their students how to fly on the DJI Phantom 3.

“We need to have the ability to fly these things and teach our students how to do this the right way. We will do that. They will be responsible. And those are the kinds of journalists and storytellers that you want to have flying these things.”

Besides preparing reporters for a loosening in FAA regulations on commercial drone use for aerial news gathering, major media companies, such as CNN, are making it clear that they view UAVs as indispensable tools, like a satellite or helicopter but safer and less costly.

Taking the lead, reporters are embracing UAV technology and transforming their profession into one that is truly without borders. From a detailed aerial photograph on the front page of your local newspaper to live HD video from across the globe, expect to see more perspectives from UAVs on the beat coming soon.

To learn more about the Inspire 1 and Phantom 3 series used by the Missouri Drone Journalism to train tomorrow’s dronalists, check out: