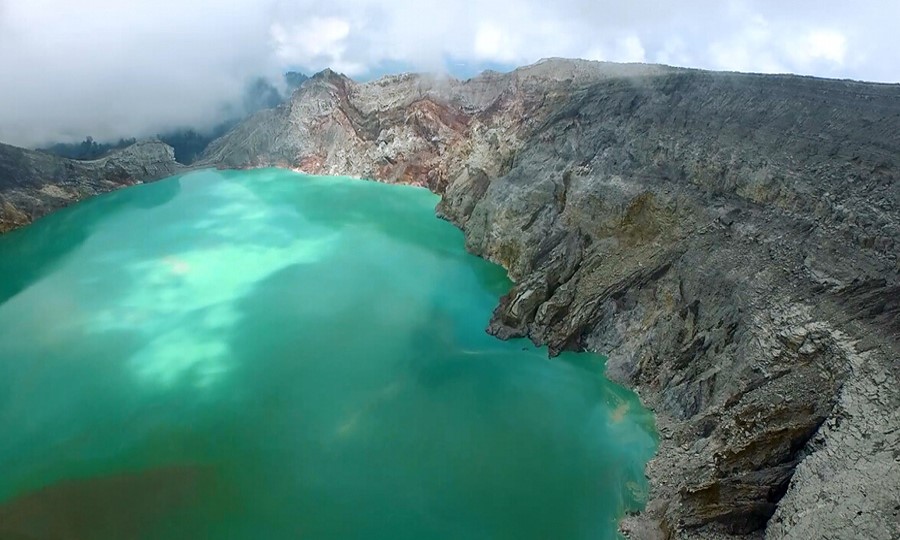 We set out to achieve extraordinary footage without the need of a large production crew - something only possible with DJI's lightweight and easy to use technology. Effectively, the team wanted to see if the product could withstand DJI’s rigorous quality control standards in the challenging environment of the Kawah Ijen volcano.

After landing at Surabyaya, the closest airport located to the Ijen volcano, the team drove for about 8-hours to the starting point of the two-hour nighttime hike, which started at 1am, to get to the edge of the crater. From the crater, it was another 45-minute trek down to the bank of the crater.

The crater is surrounded by toxic fume of sulfur gas that’s coming out of the sulphur vents. Sulfur combusts on contact with air to produce stunning blue lava-like rivers of bright light, which emerges from cracks at temperatures of over 600 degrees Celsius (1,112 degrees Fahrenheit). The electric-blue flame of Ijen is one of the only places in the world where there is such as extensive flow of sulfur coming out of the volcano. The team was able to successfully fly the Phantom 3 Professional above the volcano and get some stunning shots of these blue flames that nobody else has managed to get before. 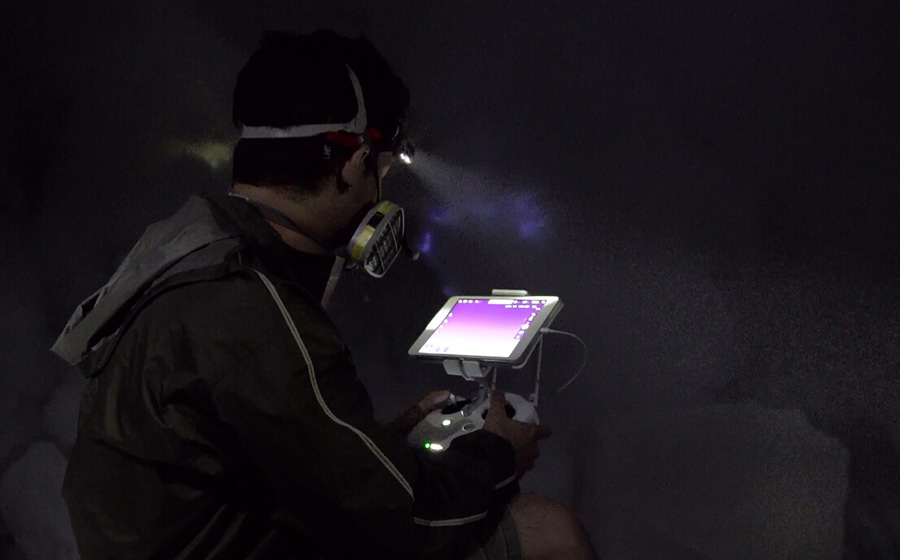 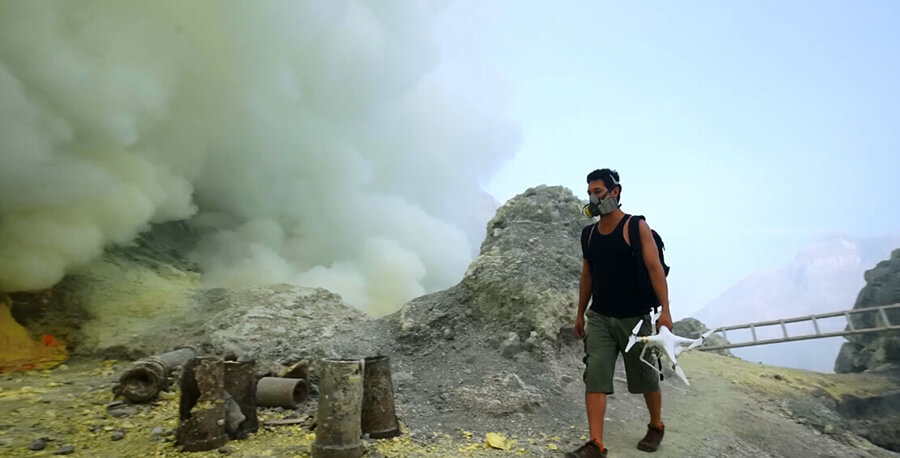 The team traversed through some pretty serious sulfur rock areas, where even wearing a gas mask did not help to prevent inhaling toxic fumes. The trek was worth it because as the team got to the top, they were presented with one of the world’s most spectacular natural scenery. “You see this incredibly bright aqua blue water just facing you,” said Justin. “It looks like a place where you’d want to go diving and go snorkeling. Obviously, you can’t do that because it is acidic enough to dissolve clothes, eat through metal, and cause lifelong breathing problems.” 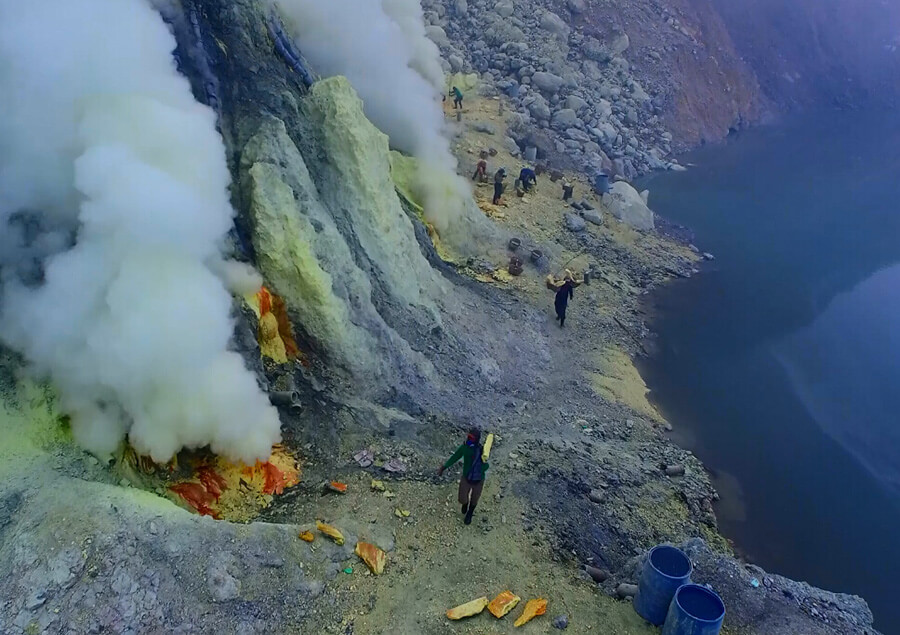 One of the things that the team noticed were the hundreds of sulfur miners who carry extremely large and heavy loads of the sulfur down the mountain. Each day, they collect yellow lumps of sulphur that solidify beside its acidic crater lake. Once processed, the sulphur is used for many purposes in factories globally. The miners work without much protective gear, except maybe a damp cloth to cover the nose and mouth to protect from the toxic fumes.

“I start at 3am to mine sulfur, twice a day. I carry about 70kg of sulphur per trip,” says a miner who has worked at the crater for 12 years.

The team also got to meet the Chief Volcanologist at Mount Ijen, Bambang Heri Purwanto, who was very impressed with what he saw from the Phantom 3 Professional’s footage. 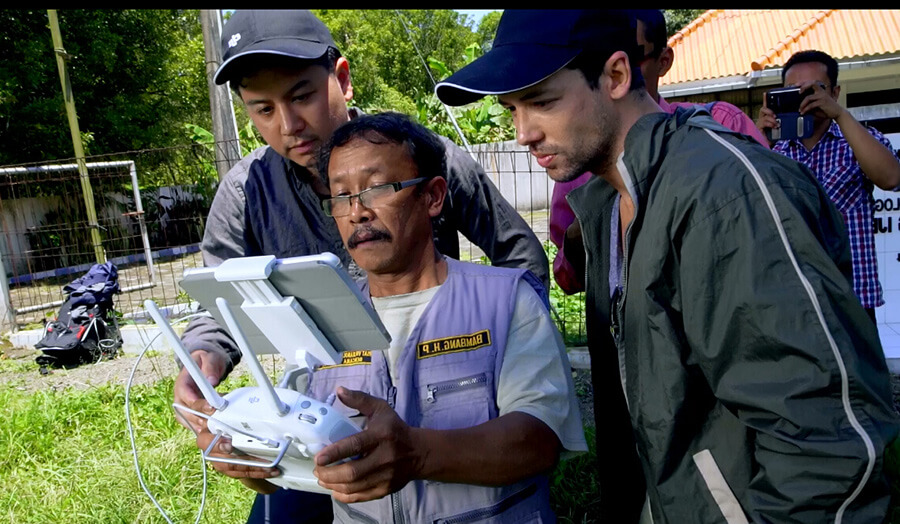 “We use a variety of tools to monitor the volcanic activities of Mt. Ijen, including seismographs, CCTV, EDMs, and Tiltmeters,” he said. “A drone can be very useful to visually monitor a volcano because we can attach an infra-red camera to the drone and send it directly to the location and receive live temperature readings. In the future, I’m sure volcanologists everywhere will be using drones for visual monitoring”. 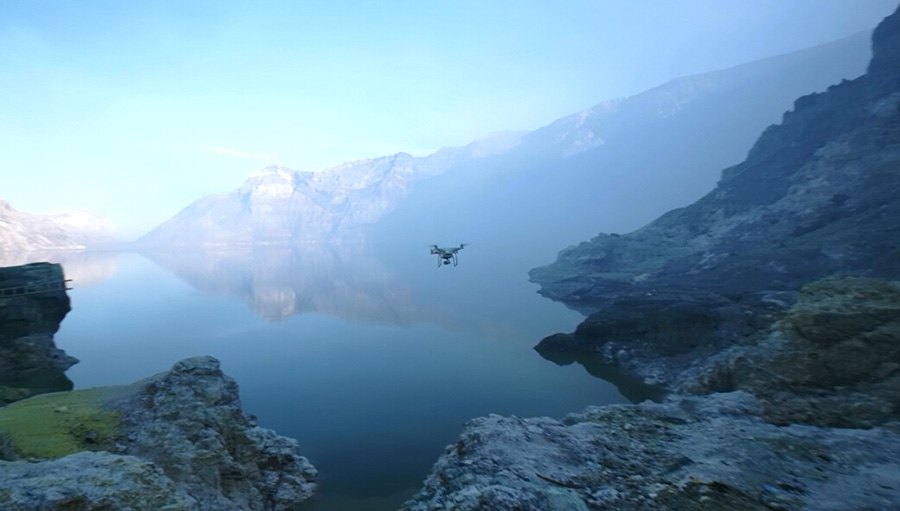 “As filmmakers, we’re always thinking of new ways to get creative shots and limited when we’re using a normal camera that can’t fly,” Justin said. “With the Phantom 3 Professional, you’re not limited. You can go anywhere.”