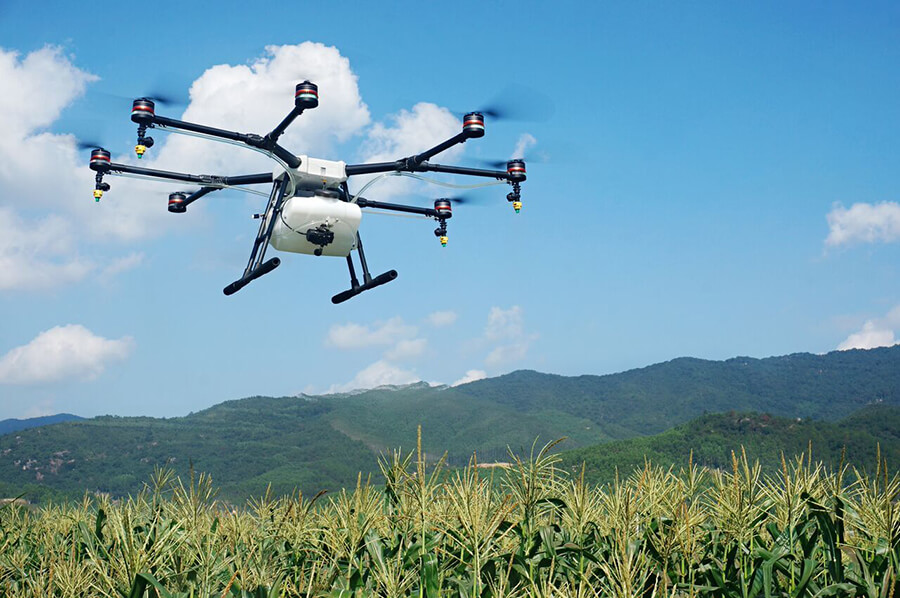 The DJI Agras MG-1 is dustproof, water-resistant and made of anti-corrosive materials. It can be rinsed clean and folded up for easy transport and storage after use.

The eight-rotor Agras can load more than 10 kilograms of liquid for crop-spraying and can cover between seven and 10 acres per hour. It is over 40 times more-efficient than manual spraying. The drone can fly up to eight meters per second and adjusts spraying intensity to flying speed, ensuring even coverage.

“The launch of DJI’s agricultural drone displays our unmatched knowledge base and development skills,” said DJI CEO and founder Frank Wang. “With this new product, we’ve shown that DJI can not only offer the ultimate aerial experience for the mass consumer, but also improve the efficiency of production and benefit so many others in all walks of life.

The Agras features DJI’s industry-leading flight-control system and microwave radar to ensure centimeter-level accuracy. During flight, the drone scans the terrain below in real-time, automatically maintaining its height and distance from plants to ensure application of an optimal amount of liquid. DJI’s real-time Lightbridge 2 transmission system is also onboard.

Users can select automatic, semi-automatic or manual operation modes, depending on terrain, with uniform spraying carried out via the drone’s nozzles. The drone has four replaceable, ceramic nozzles, each powered by a motor. The included nozzles can be used for thousands of hours of spraying. Downward airflow generated by the rotors increases spraying velocity and ensures the agent will reach plant stems and leaves near the soil.

The Agras MG-1’s body is sealed, and features an integrated centrifugal cooling system designed to extend motor life by up to three times. Triple-filtration cuts off intake of mist, dust and large particulates to reduce wear from impurities. As the drone flies, air enters the aircraft body via the front inlet, is filtered and passes through each of the aircraft’s arms to the motors, capturing heat from all components and the entire structure. Heat is then dissipated by venting into the surrounding air.

The drone’s intelligent memory function means after the Agras MG-1 is brought back to base for refill or recharge, it will return to its last memory point to pick up spraying where it left off.

Users control the Agras with a custom DJI remote. Its low-energy display panel gives real-time flight information and lasts for extended periods on a single charge.

The Agras MG-1 will initially be available in China and Korea and later in other markets.