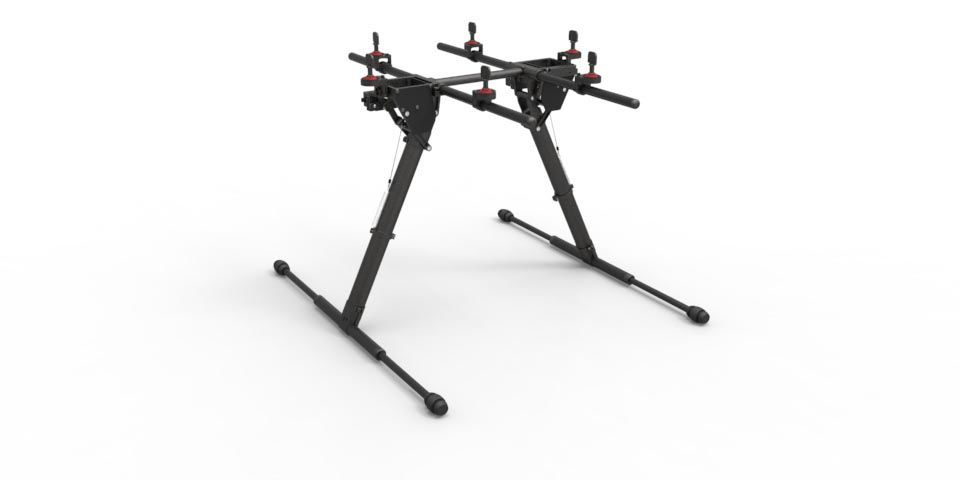 The retractable landing gear will not block the view of the camera lens, making smooth shooting in all directions possible. Gone are the days of seeing any part of your S800 in a shot.

Innovative Design With A Stable Structure

The creative design of the over center locking mechanism ensures the landing gear maintains a fixed/locked position even when there is a power failure. The innovative design makes the structure stable and reliable.

In order to avoid complex operation, the S800 retractable landing gear is designed to give simplified setup and operation. You can just use any 2-position switch channel to control the landing gear.

Install the servo arm according to the instructions and then calibrate in accordance with the LED indicator, the adaptive function of travel calibration makes it easy to calibrate. After calibration, both left and right legs are in the lowered position, and the LED is on solid green. Then the landing gear is ready for use. The system is delivered ready calibrated.

The S800 retractable landing gear has a built-in BEC module, which is compatible with a 3S-6S Lipo battery. It can be powered independently or from the S800 center frame.

The S800 retractable landing gear has a built-in BEC module, which is compatible with a 3S-6S Lipo battery. It can be powered independently or from the S800 center frame.

If the switch channel on the TX has fail-safe function, set the fail-safe value to the lower position, so that the landing gear will be lowered when the receiver enters failsafe, to land the aircraft safely.

When powering on the system, if the TX switch is in the retract position, which is the unsafe signal for the landing gear, the LED will quickly flash RED. The landing gear will not retract until you toggle the TX retract switch.

If the S800 retractable landing gear is obstructed for a long time during retracting or lowering, then the system will start the servo block protection function to protect the servo from damage.