We recently announced our strategic partnership with legendary camera-maker Hasselblad, and as a first step in our partnership we are teaming up to bring you a series of features focused on some of the most innovative artists working in photography today. In the Creator's Choice series present you the person behind the work and the vision brought to life using DJI and Hasselblad professional imaging products. 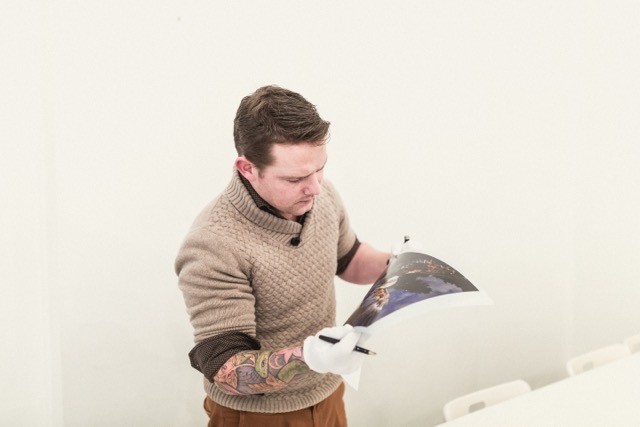 At the age of 16, Thomas Morel followed his family in their move from their native city of Den Bosch, Netherlands, to the village of Feios, located on the shore of Sognefjorden in western Norway. His parents were pursuing their lifelong dream of running an organic farm, and with its clean, untouched environment, fertile grounds and ample space, this Norwegian fjord area was the perfect place to do it. It was in Feios, at the age of 18, that Thomas first picked up a camera and decided to transition from his lifelong background in the physical arts of gymnastics to the visual arts of photography. A quick learner, he won several awards within his first years of practicing as a photographer, including a spot as a semifinalist in the Hasselblad Masters Awards in 2010, at the age of 19.

Today, Morel does both artistic and commercial work for clients like the Norwegian National Opera, The New York City Ballet, and the International Olympic Committee, from his family home in Feios, his studio in Bergen, and his home away from home in New York City.

In early 2016, he's once again nominated for the Hasselblad Master Awards and is teaming up with DJI and Hasselblad for our Creator's Choice series where we show you how the gear from one of the world's most iconic camera makers can be combined with the technology pioneered by DJI to create a toolbox that advances the possibilities of creative expression for artists globally.

There are many reasons why the world's most creative photographers keep coming back to DJI and Hasselblad, though each have their own specific ones. Morel explains his choice:

“For many years, I have been using the Hasselblad technology to do my high-speed work. Integral to my choice is Hasselblad's central shutter system which enables me to fully exploit the possibilities that my high-speed flashes have to offer. The Hasselblad cameras are tools I can't do without, not only because it gives me image files with almost limitless resolution, but mostly because it just works. Again and again. Without me having to offer it a single thought.

The Inspire 1 Pro is a piece of gear that quickly had me fall in love with it. It is extremely intuitive to use, and offers a point of view that offers unlimited creative possibilities to document my way of working. Being able to stand at one point and simultaneously experience the world from the eye of the Inspire, high up in the sky, is truly groundbreaking. I am especially impressed by the extreme stability of the camera, even though I had to fly it pretty close to it’s limits regarding altitude, temperature and speed. Just like Hasselblad, it always performs and produces perfect results, and that is what I as a professional need; gear that works no matter how hard I push it.”

The theme that binds Morel's own artistic work together is the juxtaposition of meaning — taking an object or phenomena out of its usual context and placing it into a new to create a novel expression that tickles the mind of the observer by making them reconsider what they really know about the world. Using high-speed flashes and cameras, his work is largely composed of “impossible” shots, or moments of everyday life that is rarely seen and never captured on camera.

For Creator's Choice, Thomas combined his action montage technique of freezing an athlete in motion using the Hasselblad H4D50 and H5D60 medium format cameras and a strong external light source with an extremely short flash duration, in locations around Feios, with the new perspective offered by the DJI Inspire 1 Pro.

In Two Worlds Colliding, Morel places a kayaker at the top of the Myrkdalen mountains and follows him as he makes his way down to the almost-frozen waters at its foot. At select places in his path, the kayaker is frozen in motion to create a surreal still image of a vehicle in motion.

“The first scene I had planned was a kayaker shooting through a cloud of fine powder snow. To do this, and simultaneously document it by shooting video with the Inspire, is challenging since I completely disappear in my own little bubble when I set off to capture a photograph. Each scene requires a lot of conceptual planning and a lot of practical preparations for a resulting image that matches my vision. Luckily, the Inspire is so easy to use that it can just be hovering in the right position and stay there while I do my thing.

I found a good location together with the Red Cross folks of Myrkdalen Alpine Centre, and there I set up the studio strobes to be ready when the kayaker rocketed by. It took a few tries, but eventually I got the exact look and crispness that I was looking for in the shot. It is not about luck. If it’s not good enough, I persist to keep going until I get what I want. Basically every detail is planned and provoked; not because it necessarily honors 'truth', but because I find it to be the most appealing visual expression.”

“For the second scene,  I wanted to capture the kayaker in the midst of a 3 meter drop, but because of the extreme temperatures, there where simply no drops that could have been pulled off safely without the risk of hitting solid ice at the bottom. So one of the paddlers scouted this location, where we also shot the rest of the river shots with the Inspire 1 Pro.”

"The third scene is a really complicated one. Capturing a shot like this requires many days of trial and error, laying in ice-cold water when the current swipes you everywhere but where you want to be. For this image, I used a Hasselblad camera in an underwater housing custom built for the system, with integrated cable and hot-shoe functionality to enable communication with the strobes that are positioned above water.

One of the main challenges was that the kayak didn’t go deep enough into the water to show in a part of clear water that I had highlighted with the strobes. Finally, I got it to work by filling the kayak over halfway with water. Poor guy, but he didn’t complain even once.”

We hope you enjoyed the first Creator's Choice artist feature and seeing how powerful imaging technology can be used to bring artistic vision to life. Stay tuned and follow @DJIGlobal and @Hasselblad as we will be back with more shortly!