In 2014, the U.S. National Transportation Safety Board effectively opened up the skies for commercial use of drones. Today, many drone services companies are validating the value drones bring to construction sites. Drones are rendering traditional construction surveying methods obsolete.

By utilizing a DJI drone and DroneDeploy software, contractors have the potential to automatically capture aerial images and instantly process them into useful data for real-time decision making. With the tap of a screen, a drone can now generate an extremely precise 3D model with millions of points in under 60 minutes. Traditional ground-based processes can take weeks and only generate one thousand points. The drone-service companies can provide construction contractors better information at lower cost, increasing efficiency of inspection processes.

Dale Parrish, owner of Hover Visions, was hired by Aerial Data Service, Inc, a company working on an oil storage tank construction site in Cushing, Oklahoma. Cushing is the oil hub of the world, storing more than 85 million barrels of crude oil – more than 3.5 billion gallons.

National legislation stipulates that each tank must have proper dikes built around it to contain the oil protect the environment in the event of a tank breaking. Previously, monitoring construction of the dikes from the ground on a multi-acre site was a very cost and labor intensive task. The typical site manager paid thousands of dollars to hire a manned helicopter biweekly for several months. The helicopter services simply produce a handful of still aerial photos, but do not process images into easily useable data.

Drone services transformed the inspection process. Within minutes of arriving, Parrish deployed his DJI Inspire 1 drone to autonomously collect and process images of the site. Within an hour, he had raw images, digital-elevation models, a high-resolution orthomosaic and an interactive, zoomable 3D reconstruction of the entire site.

“A 15-minute Inspire 1 flight and the DroneDeploy software suite provide better site data than hours of helicopter time, at a fraction of the cost,” Parrish said in an interview.

Parrish provided the site program manager with 3D models, interactive maps, and digital surface models all within an hour. 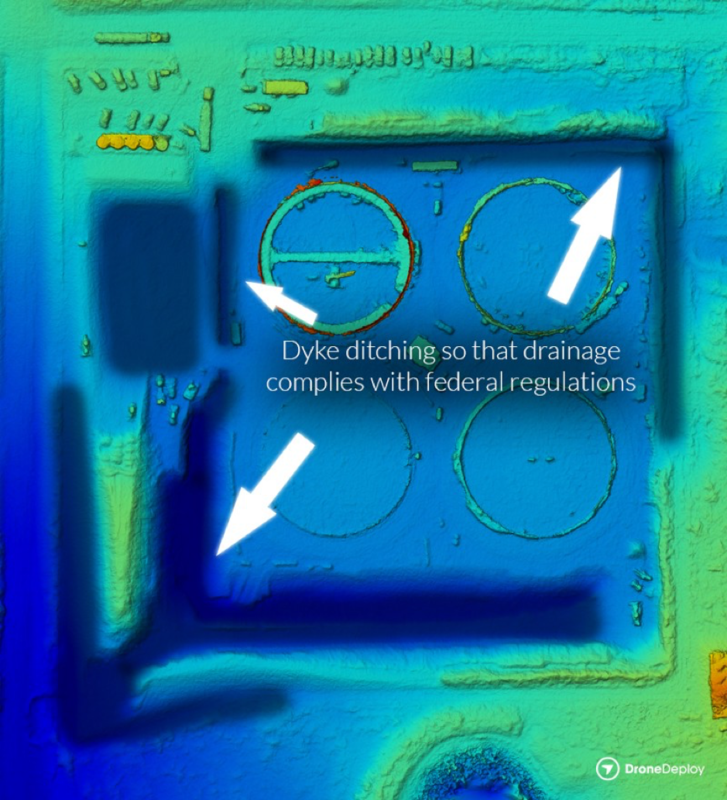 “As this project progresses, we can use the same consistent data formats from each flight to ‘scroll through time’ and ensure construction is meeting deadlines,” Parrish said. “Time and money are on the line on this project, and DJI and DroneDeploy ensure the client gets it done with maximum efficiency.”

Even the world’s largest players in the oil industry are acknowledging the value of drones. In 2014, The Wall Street Journal shared 3D models generated by a drone to officials from BP.