Before and after the hurricane struck, Measure was able to successfully provide crucial services such as newsgathering, critical infrastructure inspections, and insurance claims assessment. Overall, Measure’s work enabled communities across America’s East Coast to respond as soon as possible to this natural disaster and minimize loss of life and damage to the local economy.

In general, the Measure team remarked how DJI has driven the push for more effective and resilient drones, which have enabled Measure to provide these essential services.

You can view the full recording here or read the summary below.

Here is a brief recap of what was discussed during the webinar:

When deploying a pilot team to the South Carolina area, Measure was able to collect supplemental, B-roll, footage for news broadcast customers. With this footage, Measure helped enhance the level of situational awareness for on-scene reporting, providing a whole new perspective of what was happening on the ground.

Throughout the question and answer section, David Bowen and Chris Courtney – Measure’s Chief Pilot – provided a detailed view of the logistic and regulatory challenges they faced when handling these newsgathering missions. 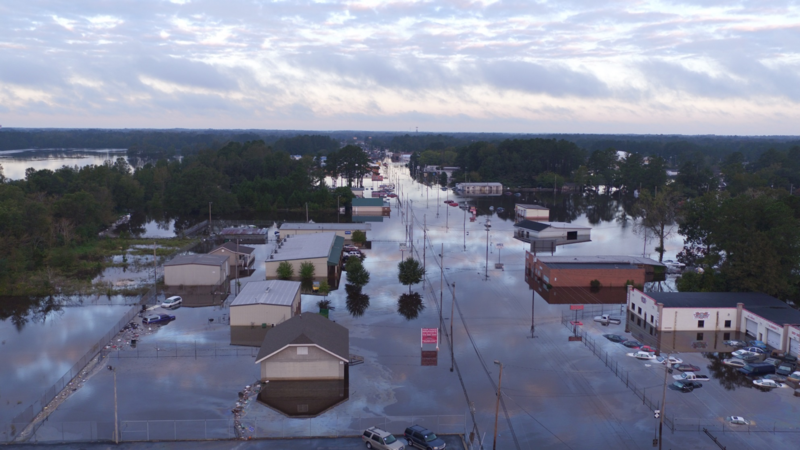 Chris Moccia – Measure’s Executive Vice President of Infrastructure – talked about how his team worked with Verizon to ensure critical infrastructure such as cell towers were brought back online as soon as possible. The Measure team would travel to sites before Verizon technicians could arrive and, using the Inspire 1 Pro, live-stream footage of the damaged site to Verizon so their teams could better plan their workflow with getting the cell site online as soon as possible.

The value of Measure’s assistance in infrastructure inspections was made clear to Verizon during their first deployment in North Carolina, where Verizon teams could not investigate the cell site due to significant flooding. With Measure’s help, Verizon was able to understand not only what was needed to repair the site but also prepare their approach strategy, which saved the team days.

The Measure team flew an Inspire around the entire structure and then closely inspected a flooded on-ground compound that the team believed might have exposed electrical lines. Due to the capability of the Measure flight crew and DJI platform, the time it took to restore the flooded tower in North Caroline was collapsed to 8 hours, versus potentially several days.

Measure’s Abigail Lacy detailed the application of aerial data in verifying insurance claims in the wake of Hurricane Matthew. Much of Measure’s work in assisting insurance companies focused on providing roof inspections, which proved too dangerous for manual inspections. Their pilot team would quickly upload the data to their teams back in HQ, who would process and deliver the data to the client.

For this use-case, Measure noted that it was most important to have a reliable and stable aerial platform and, for specific missions, a thermal camera to better assess water damage. Therefore, Lacy noted that the Measure team used a variety of DJI product solutions, such as the Inspire 1 Pro, Phantom 4 and Zenmuse XT thermal camera.

Lacy noted that the technology and regulatory environment is quickly shifting, and that although the main insurance use case for drones today is post-catastrophe, she sees them being more regularly used in the not-to-distant future.

During the last 20 minutes of the webinar, the Measure team answered questions from the audience. Here are two of the questions, please check out the video below to watch the full video:

Q: What is the difference between a helicopter mission and a drone mission?

A:  Comparably speaking, a drone mission is more cost-effective. And with a drone, team was able to get a closer view of a specific site using features like precise hovering.

A: We really value the power and stability the Inspire family bring. Some technical modifications on the Inspire 2 will actually help us quite big. The inspire 2 has a broadcast mode that we can directly do aerial live-stream to TV instead of going through a conversion process.  Besides, the Inspire 2 has the ability to have zoom cameras, with higher resolution capability, which is crucial when we some times need to remain distance from the location.