For fire rescue teams, dangers do not only exist where flames are blazing with plumes of black smoke. Emergencies involving Hazardous Materials (Hazmat) and Chemical, Biological, Radiological, Nuclear and Explosive (CBRNE) substances are some of the most dangerous situations faced by emergency first responders. And they happen more often than we would imagine. According to US Department of Transportation’s Hazmat Intelligence Report, a total of 16,873 incidents were reported in 2017. That means on average, 46 Hazmat incidents are happening every day in the US. 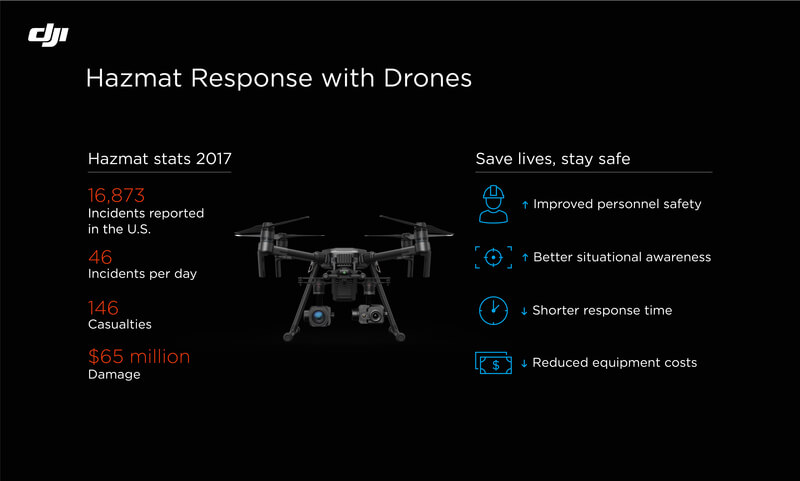 It is important to make sure first responders have the right equipment to gather the most accurate information, so that they can have the best chance of tackling hazards whilst maintaining their own safety. In Manatee County, Florida, the Southern Manatee Fire Rescue (SMFR) team is incorporating drones (UAV) into its response efforts to improve the safety of its first responders by training its first arriving crews to use DJI drones. The SMFR Hazmat Team has done so by attaching equipment that detects hazardous materials and relays its findings to responders in real time, thus enabling them to assess a hazmat situation before exposing responders to a potentially perilous area.

“For us to be able to get in the situation in just a few minutes and determine what type of hazard this is, if this is something that is going to blow up or something that’s going to poison people, it tells us which direction to take the incident,” explained Chris Gould, Battalion Chief of Southern Manatee Fire Rescue and the county’s Hazard Materials Team Coordinator, during a recent hazmat drill where his team utilized DJI’s trusted Inspire 1 platform and newly released M210 with thermal (XT2) and zoom (Z30) cameras. Battalion Chief Gould has seen drone technology help his team in multiple ways. 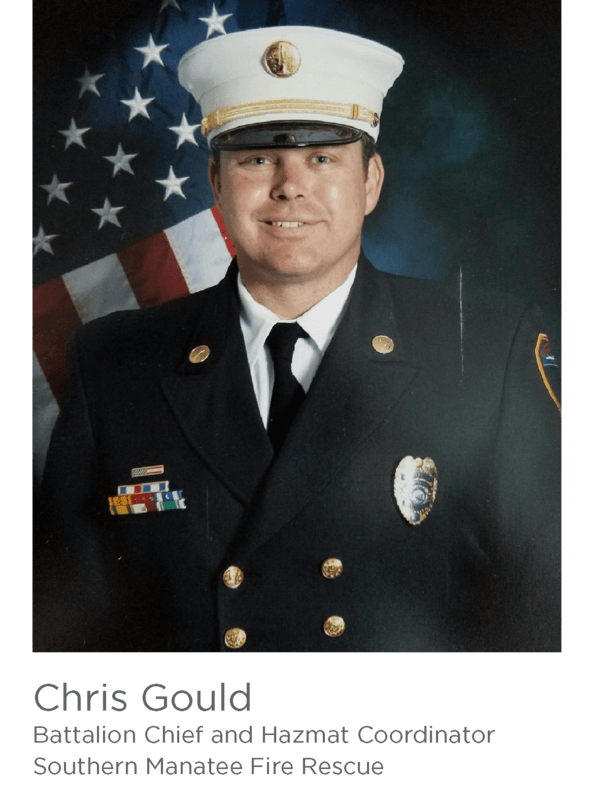 The SMFR Hazmat team has found that often times what would take hours using conventional methods could be completed in minutes using a trained pilot with a drone. An example is with first entry crews, the air supply lasts for 30 minutes which means only 10 minutes to capture data and look for victims because they need 10 minutes to walk from IC to hazmat location and another 10 to walk back. So, to carry out such tasks, crews have to enter multiple times, not only spending more time but also risking their own safety. Now with drones entering the site as vanguards, the crew can get a detailed overview of the site, and have tools dropped to the right location before they enter. This saves 2-3 hours of operation, and more importantly, lives.

By utilizing a drone on-site, responders are able to identify problems, confirm or deny questionable intel, and determine the appropriate actions to take with maximum accuracy. “We had a desire to use the drone for more than just an ‘eye in the sky’. We wanted to use the drone in a way that it could take some of the burden off our Techs such as recon, hazard ID, and metering or remote sensing,” said SMFR’s UAV Coordinator Rich Gatanis. 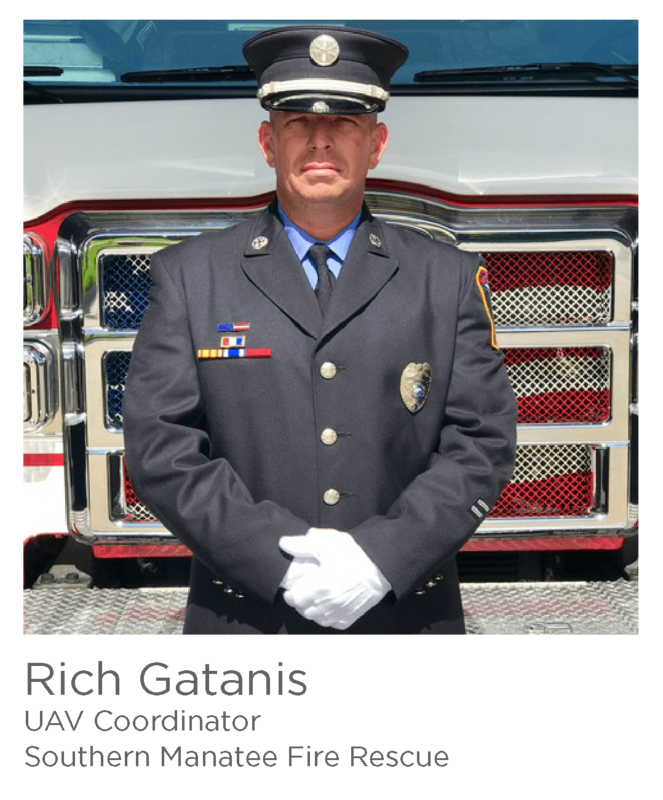 XT2’s MSX feature quickly interpret data with details from the visual image overlaid on the thermal data stream, like any sort of writing or labeling on the building/tank etc. so that crew can better identify the substance in a tank or locate a lost person. 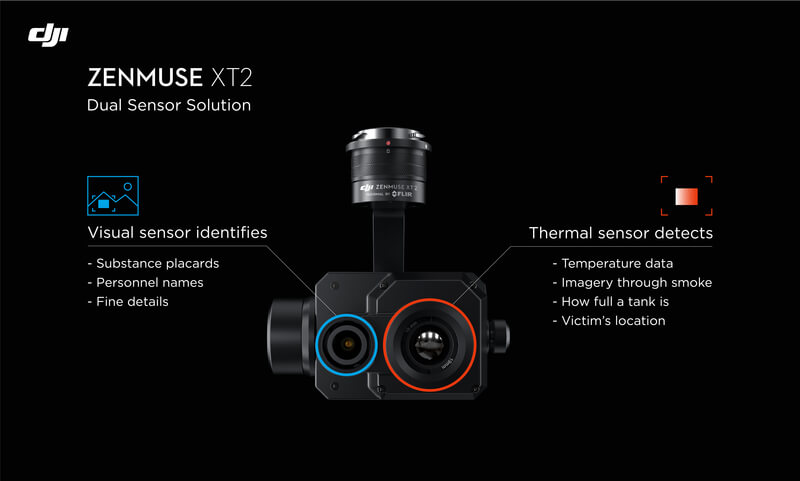 The UAV was also used as a safety “overwatch” to maintain a larger view of the site allowing the incident commander to continually reassess any additional hazards that may develop during or after crews entered into the hot zone. Footage captured by UAV was transmitted to mobile devices and mobile command vehicles so that incident commanders have continuous real-time information of what is happening.

The overwatch capability was used to collaborate with factory managers in real time and immediately identify alternative actions if the primary leak control efforts were ineffective. The Incident commander was able to

Battalion Chief Gould said crews successfully used the technology last year during the five-alarm massive warehouse fire at Callahan Tires.“We were able to use the drones to determine the plume was heading toward a school,” remembered Gould. “Within a few minutes, we were able to call the school to tell them to shut all the doors and protect everybody in place.”

The technology can speed up response efforts by 1-2 hours so the department works at a higher speed. It also cuts down the usage of costly single-use apparatus such as hazmat suits that costs $2000 each. The team is now using their drones to help other public safety agencies in the county to make sure all first responders can respond as quickly and safely as possible.

According to UAV Coordinator Rich Gatanis, “the initial idea of a drone was to augment our hazmat response with another layer of safety. We talked about other solutions in the beginning. The issue was that those solutions such as ‘Robotics’ were not as cost effective as a UAV solution which were a fraction of the cost.” 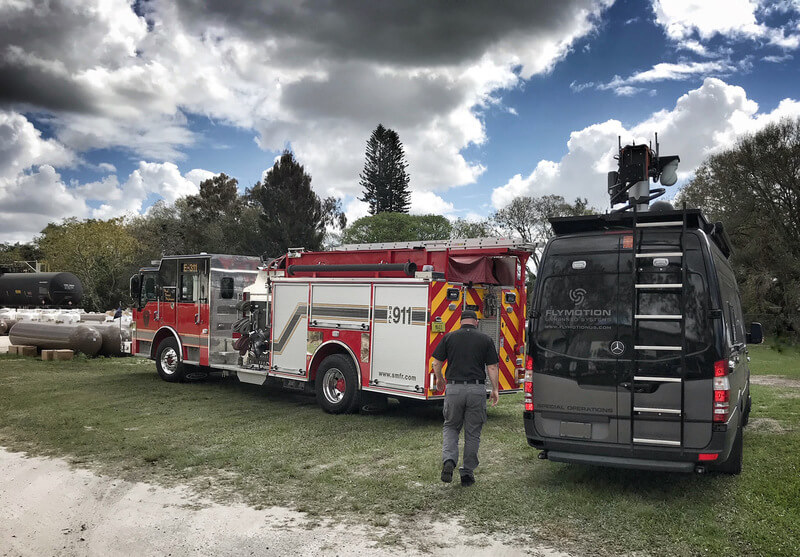 An ecosystem built for more possibilities

“Having the ability to use the drone to get that critical information quickly without having to put firefighters in harm’s way, was a huge advantage for our team.  It wasn’t long after we got our equipment that I began experimenting with ways to carry our gas/radiation/chemical meters into the scene using the drone,” said Rich Gatanis. Beyond adopting the latest technology, the SMFR team is also contributing insights that will define the future of drone operations for Hazmat scenarios. This can be seen through their work using the DJI AeroScope to manage and ensure the security of the immediate airspace during operations.