Aerial Saviors and Eyes in the Skies 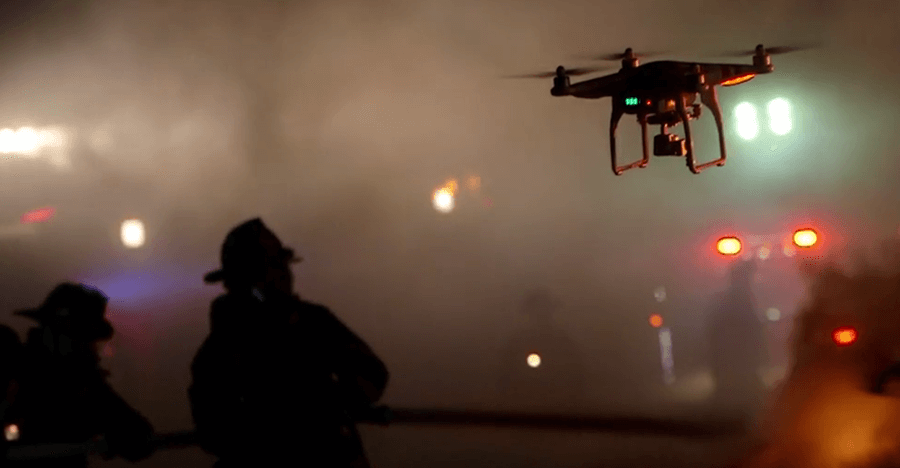 The small town of Mechanic Falls, Maine isn't a place you'd associate with dramatic search-and-rescue operations, least of all those involving the use of drones, but life always manages to surprise us with the fantastic. On a bright summer day in July, two teenagers took a trip down to the local rapids, only to get trapped on a rock in the middle of the surging waters. The two teenagers were eventually rescued thanks to local firefighters. But this wasn't any ordinary rescue effort. While rescuers began setting up an inflatable dinghy to help the young teenagers, Fire Chief Frank Roma used his Phantom 3 to fly a haul line out to them.

This shining example of an airborne savior is by no means a one-off, with emergency services and search-and-rescue operations increasingly making use of unmanned aerial systems (UAS) in a plethora of applications. For example the Bradford, Connecticut, Fire Department's ingenious use of a Phantom 2 Vision+ in monitoring a potentially disastrous fire involving a granite quarry and dynamite, which was covered last year in DJI Stories - Above The Flames. Or, when intrepid DJI Inspire 1 pilot Garrett Bryl proved vital to the search-and-rescue mission in the recent flash floods in Texas by attaching a searchlight to his UAS in order to light the way for firefighters scouting the area for stranded residents.

Another fascinating example comes from Ventura County, in California. Ventura County became one of the first counties in the United States to include UAS in search-and-rescue operations. Last year, they deployed unmanned aircraft to search for a missing firefighter in the Sespe Wilderness area of Central California and since then have expanded drone use to hazmat operations, traffic accidents and other potentially critical incidents.

With the launch earlier this year of SkyFire Consulting, a DJI partner and an advocate for increased drone usage in the emergency services, the use of drone assistance in these areas is really taking off. One of SkyFire Consulting’s guiding arguments for drone usage is the huge amount of time, effort and money that they save, explaining that instead of spending increasingly higher costs on large aircraft to survey a scene after a fire or natural disaster, a small, battery-powered UAS can travel to remote or other hard-to-reach areas with infrared cameras and sophisticated sensors, cheaply, quickly and effectively.

Though drones are, at the time of writing, not able to actually perform the rescue, the rapidity with which they can be activated and made use of can give emergency service operators precise information about exactly where they need to potentially send out a helicopter or dispatch a medical team or ground crew. This in turn saves valuable time during rescue missions, and most importantly, saves lives. One recent illustration of UAVs providing assistance in this role was when DJI took part in a massive project to help out with 3-D mapping heavily damaged areas of Nepal after the massive Ghorka earthquake, earlier this year.

As the plethora of technologies being combined with UAS increases, so too does the scope of possible applications, like the recently launched Zenmuse XT thermal imaging camera, which can be attached to a drone, and has the potential to vastly improve the capabilities of not only emergency service personnel, but also organizations improving the safety of certain areas in ways that would have taken twice as much time and effort in the past.

The ways in which technology and search-and-rescue methods are evolving and becoming integrated with each other is inspiring innovative and life-saving solutions to issues that have always been of critical importance to our civilization, and improving not only how we rescue lives, but also how we can improve them.

To find out more about SkyFire Consulting and their work, head to: http://www.skyfireconsulting.com/

For more on DJI's recent humanitarian action in Nepal, check out: https://www.youtube.com/watch?v=QXkcvzxBsrY

The Inspire 1 and a little bit of ingenuity can save lives:http://www.huffingtonpost.co.uk/2015/05/20/dji-inspire-quadcopter-drone-saves-texans-from-flood_n_7341490.html

See how the Zenmuse XT is going to transform aerial thermal imaging: https://www.dji.com/product/zenmuse-xt