Moose To See You! 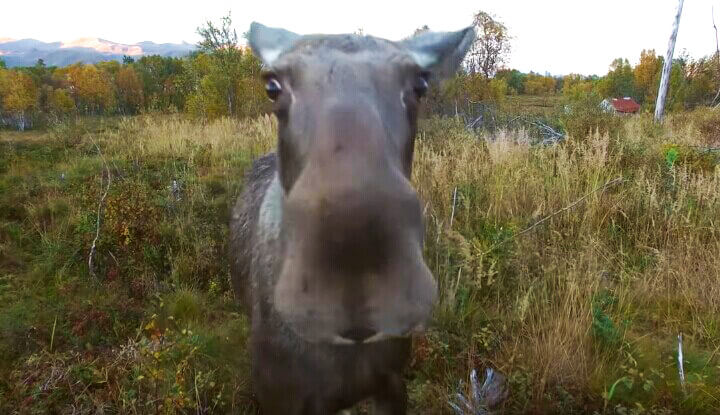 This week. we're taking a deeper look behind a fascinating video we recently discovered on YouTube [https://www.youtube.com/watch?-Kc] involving a moose, a drone and the wonderful Norwegian countryside. We spoke with the man behind the controls, Norwegian high school teacher and avid Phantom flyer, Kolbjørn Larssen, whose “Moose plays with drone” video has already proven to be both a great demonstration of the curiosity of animals towards drones, and an excellent example of how drones can be used to inspire students of our day. He gave us his thoughts on the future of education and drones, what inspires him and just how he filmed that moose video.

First, a brief introduction for our readers/viewers!

Well, I am a photographer and cameraman, and spent 12 years working in national television production in Norway. Since  2009, I have been a media teacher at a high school in Stokmarknes, Norway. In my spare time, I enjoy photography of people, nature and the famous Northern Lights. I love the fact that drones give me another new and fabulous tool for storytelling. I became fascinated by drones when they became more commercially available a few years ago and started building my own drone with parts ordered on the Internet. Needless to say, it was not a big success, but I loved the idea of getting quality aerial shots for a competitive price. The big turning point for me was when DJI released the Phantom 3. Then, I realized I could get rock-steady images and videos from the sky. I loved it!

What inspired you to first buy/get into drones?

I was fascinated by the reality of getting my camera up in the air to tell a new story every day, each time from a totally different perspective. I love the combination of media and technology. I started out by making my own drones, but gave up when DJI launched the Phantom series. Now, I´m onto the newest model, the DJI Phantom 3 Professional.

What do you find yourself doing mostly with drones?

I use drones for photography, video and when I can, in class with my students. I can´t wait to see where this technology can take us.

What do you think about the possibilities of drones and education?

I really believe that we are only just beginning to see the potential of drone usage, both in educating the next generation and for commercial use. Drones give such a liberating sense of freedom, to go places and see things we could never normally imagine, from angles never before considered. One example which inspires me is the possibility of using drones in teaching how Norway was formed during the Ice Age. For geography class, we could use drones to see how the landscape is formed from the ice by getting up in the air or using drones in physics class as the perfect blend of science and technology. The DJI drones are packed with really incredible technology that is ideal for inspiring people of any age to learn more about the world around them.

How do you hope using a drone will impact your students and how have they responded?

I try to make the students see that technology and physics can have real practical uses in their lives. I love the feeling of introducing a potential future engineer, physicist, geologist or photographer to the future of technology and make them see that this is something they might end up working with when they get older! It really inflames their curiosity and makes them sit up and really pay attention.

The following is a quote from one of Kolbjørn's students, Iver Jensen, 18 -“By bringing drones into the classroom, not only have we increased the quality of our short film projects and student-led TV shows and learnt more about how drone technology and media can work together, but we have also learned about the ways in which drones can be used in all sorts of ways, all of which are so helpful for further study and our later careers.”

Tell us about that incredible moose video!

Sure. Well, right now, it's moose-hunting season in Norway. I am an active photographer, and not a hunter. So, I was driving my car to go recycle a few things, and by accident, the drone was with me in the car. I was listening to the radio, and they mentioned that a high number of moose had been spotted hanging around the outskirts of town. Being an avid photographer, I knew this was a great opportunity to get some fantastic shots, so I skipped the recycling and went to go buy a memory card for the drone instead. After a while, I found one moose in the perfect spot, and took off. I’d tried to film moose before, but they tend to run away as soon as you get close. So you can imagine how excited I was to see how interested the moose was in my Phantom! I had to back up quite a few times so he wouldn’t get too close! Quite an amazing experience.

The video was shot on September 24th in Stokmarknes, Norway. I used a DJI Phantom 3 drone for this video.

How do you think UAV technology can better help us to learn about nature?

The fact that we can begin to see nature from incredible new perspectives is absolutely awe-inspiring. We can get now get closer to animals, water and dangerous environments that are usually inaccessible on foot, all safely and without disturbing the natural environment. For example, where I live there are a lot of whales, fantastic animals that regularly come close to the shoreline. The possibilities of further studying wildlife without interfering in their habitats are increasing every day!

Tell us about your future plans with your flying camera?

My next plan is to go out with my Phantom and get close-ups of whales in this area. I also do a lot of Northern Lights photography. My dream is to be able to get aerial shots of the northern lights in the future. That would be awesome. I've been reading a lot about the Zenmuse X5, and I think that the X5R version is coming close to what I´m looking for. I can´t wait to test it out some day in the right conditions. I can imagine that the possibility of shooting RAW in these conditions would allow for some incredible images.

Get out there and start shooting your own wild adventures with the Phantom 3!: https://www.dji.com/product/phantom-3
For more of Kolbjørn, head to: www.krealab.no